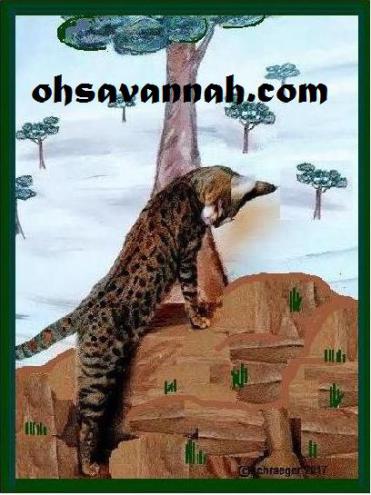 About Savannah's - In My Own Words

The Savannah kitten/cat is an exotic hybrid derived from the African Serval.  A domestic cat mates with an African Serval. A high jumping, rodent eating, thirty pound plus , spotted wild African cat.  Those offspring, known as the Savannah is said to be very 'dog like' because of  its loyalty, the way it follows it’s owner around the house, walks on a leash, fetches, comes when called, and overall personality is somewhat like a dog.  I personally think they are smarter than most dogs and smarter than a regular domestic cat.

A good 'typey' looking Savannah will have a long body, long legs, long neck triangular face, (except studs), and large long ears. The bone structure is definitely different from a regular domestic and is most obvious in F1-F3s. The hind end is higher than the shoulders. The Savannah will be spotted (unless it has a marble pattern, which is not often and not as much desired, not to mention not found in the serval, therefore not recognized by TICA) , against brown, tan, or gold with dark brown or black spots, or silver spotted w grey or black spots.  Solid black with spots under the coat is known as a melanistic. These are also known in the serval. They resemble small panthers. Like the serval, the Savannahs tail can be 3/4 size of a domestic, but not often does this trait take place. Ideally, the eyes would be hooded and there would be 'tear stains'. Nevertheless, not always. The back of the ears should be light and bordered with black, dark grey or brown. This is called ocelli.  Now I have seen this in most Savannah cats & kittens. A black nose is much desired but is not always the case. I do not think I have seen every one of these traits in one Savannah either in person or on film. It is hard to find every one of these traits in an African Serval! I.e. Not all servals have big ears! This 'checklist' is what breeders wish to achieve! However, the biggest desire of a future owner of a Savannah seems to be size. “ How large will this Savannah grow to be? It has to be large! I don’t want to spend this money and end up with a regular size cat!”  It is hard to predetermine how large a Savannah is going to be after two years of growth. Being two different species, the serval ‘Leptailurus’, the domestic ‘Felis Catus’,  compounded by the screwed up genetics of the Savannah, makes it hard to determine the size of the offspring. One litter can produce  all different sizes of kittens/cats. Sometimes it happens that an F3 can look and act much more like a Serval than an F1. I have seen very large F5 Savannah cats. It is kind of the luck of the draw. However, I am sure the size of the parents and grandparents carry some weight in predetermining the eventual size of an F1...F6 Savannah cat. Our F4 SBT litter has some large kittens! If their mom weighed three pounds at twelve weeks old, and the boys in our litter have reached over five pounds  at that same age, my guess is they should be significantly larger than mom.  Their mom is not small!  However, I make no promises.

If you want the short version to knowing what the 'F' is all about, you can go to my website and click on the link/page for, 'What the F" Explained. It has to do with the generations removed from the wild animal. It is used for hybrid dogs, (wolf) as well as hybrid cats.

If you want to know what the SBT stands for, well, this is how I explain it to myself and now to the public. Firstly, SBT='Stud Book Tradition'. It takes 3 generations of Savannah-to-Savannah breeding after the male African Serval (in which the F1 A is created), *which makes an SBT, (totaling four generations) a pure Savannah cat. At this point, TICA, The International Cat Association has set this in stone. The F4 is the first generation that can attain the SBT designation. In addition, all subsequent generations can attain this as long as they continue with the Savannah-to-Savannah breeding. Maybe some of you may be thinking, "Hmm. lets use an F1 or F2 boys every time to accomplish the task. That way a large amount of serval blood will be in the SBT." That would be nice. That cannot happen. The male Savannah is not fertile until the fifth or sixth generation. It is remarkable how this 'Act of God fits in nicely with TICA plans.

F1 girl marries the F5 or six boy, those F2 Bs that were produced marry an F5 or F6 boy. The offspring are F3 C. The F3 C   hooks up with an F5 or 6 boy, NOW we have F4 SBT=Stud Book Tradition=Pure Savannah kittens! It takes time and effort to accomplish the SBT status. It has nothing to do with amount of serval in the Savannah but (I think) it has more to do with the lack of serval blood in the Savannah that helps to attain the SBT/pure Savannah title.  I think TICA wants the breeders to create a serval looking domestic that will eventually have no serval blood. Moreover, already there is just about no serval blood in F5...F8 Savannahs. Kind of like the cute white lynx cat with the rounded ears. No longer do they have wild blood.  The title of 'Pure Savannah Cat' is given after four generations (actually three after the serval) of Savannah to Savannah breeding. In addition, as a gesture from TICA, the SBT can compete in the Savannah cat shows.  Keep in mind this is my take on the whole thing. The upside is, Savannah breeders are working hard and they are  accomplishing the serval looks in the later generations!  I have seen F6 SBT Savannah cats look more 'typey' (having several of the traits mentioned above) than some F3s, even F2s! In addition, think about this. I would not allow my toddler around just any F2 or F3 would you?

If you do not care to have your Savannah compete in shows, and you come across a breeder that discovered the perfect formula for the perfect Savannah cat that is consistently huge,  you may be looking at a situation where the breeder used an ‘outcross’. This would be a cat other than a Savannah. A cat that helped the Breeder to accomplish the giant sized F4 A that you are drooling over on face book.  Let us say the breeder has an F3(C) Savannah girl ready to breed. The breeder would only need one more generation of Savannah to Savannah breeding to create F4 SBTs.  Instead, the breeder has a friend that has the hugest brown and grey tabby male ever seen! She breeds them together. The result is a litter of five all with great spots. As the weeks roll by, the kittens grow. All five are the size of a very large and tall cat by the age of 11 weeks old. All indications point to the kitties being at least the size of dad, (Hmm. I like this analogy. Maybe I will try it!). The babies would be F4As. The ‘A’ shows that the most recent breeding used an outcross. If you ever find yourself looking at a litter of F4 Bs, this means  an outcross was used two generations prior. Three generations is indicated by a C .  And if it is four generations we already learned these are *SBTs. Pure Savannah kittens .  In addition, when you see F2 B, initially the serval was used two generations ago/the way we already understand. The serval is considered the outcross.  Do not  even ask what the result is if an F3 C  female breeds with an F5 A!  Confused?  Don’t be. Our F4s are SBTs. Our F3 (Cs) can never be.  But our female F3 C can make SBT!s  However, if any of you run into the largest Tomcat you have ever seen, and he is fertile, call me! (TICA no longer approves this breeding pair.)

There is a high price to pay because there is a high price to pay in creating the Savannah! The money, work, time involved for a breeder to get the male serval and the domestic to breed can be hell. Even after all the hell, it may not happen. A serval can totally reject a domestic. It may even reject an F2 or F3. Not as frequently but it happens often. And this is after the breeder either purchased their own serval, hand feeding it from day one, raising it for two years until it is fertile. (not many states allow servals) or taking the female to the serval. The serval may accidently harm or even kill the female during mating! And if the breeding takes, there is more that can go wrong. The gestation of the serval is approximately 75 days.  The domestic is 63 to 65 days. The kittens can be premature, or the kittens can disappear. Dissolve into the mothers body. And if the mating is successful, the breeder is

lucky to have a litter of two. Ecstatic if three. Very often, only one.  So perhaps this helps you understand the high price tag. You can always set out to create your own F1 thinking you can save money. Go ahead and try. Let me know what stage you are at when you have hit the $20,000 mark!

An F3 or an F4 I think is a great place to start when purchasing a Savannah kitten, (I do not think I have to go into the hundreds and thousands less they are then F1s & F2s ) .  I am not stating this because those are the generations we sell, I am stating it because we decided to sell those generations because they are a great place to start. We have F4 SBTs.  F4 is the first generation that can be SBTs so with that in mind, it is a pure Savannah kitten with the highest amount of serval while being an SBT, (unless on the outside chance high percentage parents and grandparents were used)!  F5, F6, and so on, the serval blood diminishes. An F4 can show many of the same serval traits as the F1, F2, or F3.  An F2 can really keep you on your toes,  as the night mine used her nails the same way a crow uses tools. She managed to remove the plate that  was attached to the window that held the accordion hose to the LG roll around air conditioner, squeeze out the opening through the window and jump two stories to the ground beneath her.  We had only had her one week at the time. I figured I would never see her again. Fortunately unscathed, when she realized it was too scary out there in the wide-open world, she meowed against the downstairs sliding glass door to be let back in.  F3s always seems to be grouped into the same category as the F1 and F2.  More serval characteristics. More physical attributes including bone structure, possibly greater size then later generations.  Definitely stranger serval quirks like trying to get to the highest point in the house even if it means balancing on the one-inch wide platform at the top of a door! Or creeping up my  back only to slowly ‘comb’ my  hair with her claws.  Many times she has ran  around the house growling out, “Ma Ma  Ma Ma  Ma Ma”!  In addition,  using both paws to fish out the ice cubes from someone’s drink only to use them in a fast game of soccer on the tile floor, (beats the heck out of a turd!). In addition, lining up her 10-week-old kittens and one by one teaching them how to hiss! F1, F2 and F3s do these things!  Moreover, you do not want to miss it! 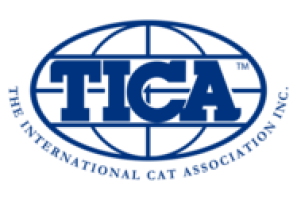 What the "F"? Explained