What The "F" explained

II hope my artwork below helps you to understand what the F1, F2 and so on stands for. F4 Savannah kittens are four generations from the male African Serval. Perhaps you are wondering if it would be better to use an F1, 2 or 3 Savannah male rather than the F5 my picture depicts. It would be nice. The generations would have a higher percentage of African Serval if it were possible. It is not. The male Savannah is not fertile until an F5 or F6 generation. Occasionally an F4 slips through the cracks. There are ways to get higher percentage F1s. After the F1s have been created and a girl is ready to breed, she is bred back to the African Serval. Her babies will be F1s.High percentage F1s. Around 75% African Serval.  Of course lower 'higher percentage' F1s are possible by breeding an f2, F3, or 4 back to the servaI. I think maybe someone out there has taken a high percentage (75%) F1 and bred it back to the serval but I have not seen or heard concrete evidence. I am pretty sure that a Savannah Cat with that much serval may have fertility issues. I guess it could be a way to get away with having a serval (almost) In one of the many states that dont allow Servals, only F1s! 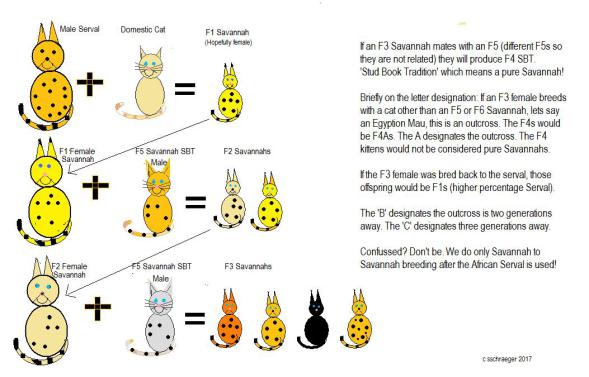